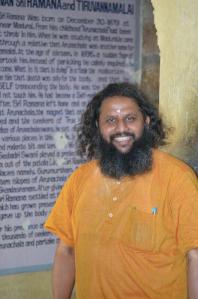 One has great relevance as a number, expression and feeling for it allows one to realize the potential within in the most natural manner universally. The one is embedded within us even before birth, when two individuals merge and become one, a spark emerges allowing the life to begin.

Similarly for those following the path of realizing the self one has to follow the nature’s law of oneness. This basic rule of merging to become one is forgotten by people as they indulge themselves in the worldly ways and through the process of layers of conditions.

Even though few strands of oneness remains like relation of husband and wife, mother and child, father and child, Guru(Master) and Shishya(Disciple) within the realm of conditions as provided by the society but those strands too are many times stretched beyond recognition as the newer versions of conditions cover and camouflage the  original conditions beyond comprehension. Yet the physical condition remains same for merging but the motive has gone beyond being alive to a momentary state of enjoyment.

Even these physical condition at the most outer level too loses attraction over a short period of time then it becomes a Bandhana (Mundane Bondage) for the Manas Bandhana (Heart and Spirit Bond) is nonexistent. When the attraction goes down either two known individuals having separate identity are living under one roof unknown to each other or they drift apart either to find new attraction or to find ways of escaping to fall into the attractive trap again. So one can find more and more affairs happening at mind level, body level and conditional levels; each time one falls one step below the needed levels of

Even within the realm of mother and child or father and child the Hridya Bandhana (Heart Bondage or Gross emotional bondage) may be there but if the Citta Bandhana (Spirit Bondage) is not there, then the emotional bondage only leads to emotional crises over a period of time, for the core remains Moha Bandhana (Infatuation Bondage), it is based on desire and need or give and take with a condition wherein the Moha Bandhana of parents are rarely given weightage by children.  The new world is seeing old age homes, child care centres, rehabilitation centres and many more but in reality they are not doing anything more than providing a basic formal infrastructure to create more people running after Moha Bandhana.

This level of understanding has crept into the Guru Shishya Bandhana too wherein even the Guru’s having great depths of knowledge have fallen for Moha Bandhana and moved away from the selfless act of giving to a state of being attached to the benefits of the giving while the Sishya’s who have moved in such realm have Moha Bandhana of gaining something just for the sake of passing it on for the sake of gaining monetary or benefits in kind. Such disciples keep gathering information and move from one Guru to another but in reality reach nowhere.

The whole world is not like that there are children who still love and care for parents, there are parents who do love and care for children without looking for anything in return, husbands who love their wives dearly, wives who love their husbands with whole heart. Similarly certain Guru’s are there who are doing selfless service to the society and Sishya’s who are following the path shown in the most auspicious, and full of reverence of the lineage.

The reason for those who are following the way is because of the Bhava Bhandana or Bhava Hridya Bandhana (Heart Bondage or subtle emotional bondage) allows one to connect to the Citta Bandhana (Spirit Bondage).

It is this Citta Bandhana that allows one to realize the value of oneness within the Self leading one on the path attaining the goals of life.

Traditionally there is a saying of Mata (Mother), Pita (Father), Guru (Master) and Devam (God) Bandhu (Relatives) Sakha (friends). Those who follow this path find that everything shall fall in place.

Today people say that they have made their own way, no it is not true, those who make the way they will always have a person to look up to, be it parents, or Guru or friend, Such a person is a Bandhu or Sakha. As the time change the ways also requires change, we adapt and evolve but the core in everything remains same only, thus having a firm core within allows one to be more deep and having foresight.

Children are never bad but parents are, those parents who have weakness in them for falling for each and every allurement howsoever shallow it is, shall pass on the same wisdom to children. So, it is crucial for the parents to be ever watchful on the ways they travel, the more shallow they are in the core the children would become more and more rebellious and would look for external guidance. With weak external guidance and shallow core within they themselves will become weak parents, leading to same collapse of the core. It is for this reason most of the relationship end, in turmoil and tense scenario.

I am taking an example of Guru-Sishya journey it is a relationship like mother-child, father-child, husband-wife, Teacher-Student wherein both simultaneously take the journey initially but then it goes beyond any relationships, for it is Divine way then.

The path of beginning should be with the self, wherein the heart and mind reaches a state of commitment, a commitment to self like a promise, a oath. This is called Sankalpa. This is the beginning of the journey for creating a depth within you. Once the sankalpa is made one should look for a Guru, who can bring you to that level of core that one requires.

One can gain some knowledge from books, true; initially one can also look for guidance from writings and sayings of Guru’s who are not in body, but never hold on to them else you will lose everything for their only role is to guide you to a living Guru only.  One has to realize that it is not easy to have spirit communication, normally the ego within the seeker makes one feel connected to the image of the departed holy spirit and the ego creates and manipulates the guidance as per one’s own convenience, needs or desires.  So when the attachment grows deep, make sure one holds back and seek guidance to reach a Guru who can guide you properly. The Departed Guru’s can be a Vipra Guru (one who inspires), Suchaka guru (one who provides spiritual practices and initiation theoretically)

When one meets a Guru it is crucial to remember that a seeker should not go to Guru for testing or mocking a Guru or comparing a Guru, nor should the Guru make unnatural claims that cannot be achieved or attained.

Never ever imagine that within a day or within few minutes one shall reach enlightenment. No never think on those lines, think for now and be there as a seeker. Like a toddler or a child if he assumes that He knows everything then parents will have a hectic time in resolving this illusory assumption. So let us take a small journey

In the beginning the Guru will guide you with basic outlines of walking on the path, in the process steps and guidance shall be provided. One should be ready to follow the steps, and it is necessary to practice it to reach a level of perfection. There has to be continuous interaction between the Guru and Disciple and also the Disciple should be ready to demonstrate the ways in front of Guru, so that Guru is able to make corrections. The more there is lack of communication on either front the more the whole knowledge, time goes waste.

Once the steps are known, realized, worked upon on regular basis with clear understanding and queries related within the realm of the steps cleared. One should move into the realm of queries which can also be with regard to the experiences one has but it should not be based on the conditional view and culture one holds as true. The more realistic approach one adopts the more deeper one gains.

Once proficiency is attained in the steps one can look upto Guru to guide one to higher realm of attainment that can make one evolve further. This is a crucial point in the journey for here if the Guru is not able to provide way ahead, then either Guru has to provide way ahead to the seeker by showing him another Guru who can guide or if the Guru is unable to do it then the journey of seeker begins from this point. In case of Guru not able to show a way, the seeker should meditate properly with the ways and techniques learned more strongly and more deeply for a stage would come when knowingly or unknowingly one will come in front of the Guru. Then the journey again continues for it is the subtle awareness generated by the self perseverance (Sva adhyaya), that allowed one to recognize the Guru and the Guru to recognize you. If the practice and sva-adhyaya is not there, it is quite possible that the seeker may not be able to recognize the Guru, even if the Guru comes in front of the seeker.

A stage in evolution happens within the seeker attains a level of learning wherein one becomes capable enough to pass the steps to others in a methodical and rationale manner. This stage of learning and passing on the knowledge allows one to become a Acharya (Teacher).

During each level of journey the seeker learns to become a toddler(inquisitive / Bubhutsatsu Sishya), then a child(Listener/ Shrota Sishya), grows to become a student(Gainer or Receiver/Labdr Sishya), then a true seeker(Anvesaka Sishya)  and finally a disciple(Vineya Sishya) while the Guru transforms from the stage of Mother(Siksha Guru) who guides a toddler to a stage of Father (Mantra Guru) to a stage of Guru in true Sense (Diksha Guru). The Diksha Guru transforms the Disciple into Acharya, a reflection of Him that is the living breathing light of the lineage (Parampara). After the stage of Disciple itself the relationship between the Guru and Disciples transform into light in itself, for each and every Disciple radiates the light and energy of the Divinity within the lineage in the brightest manner.

This is the same relationship that one should aim at for creating oneness within the family, parent-child relationship, for then the Heart, Mind and Consciousness always are in present moment leading one to realize the depth of the whole cycle of life within the life itself.

Soul Searchers intends to raise the consciousness of people and to help create a turning point on this planet—a world where people are in tune with their inner-selves, living healthy and creative lives and are no longer swayed by religious dogma or politics.  The purpose is to bring the state of righteousness (dharma) back again in current state of political turmoil and selfishly motivated people.  We believe the truth can be known and realized through guided and workable ways. Thousands have benefited from the process of initiation and share them with your friends and family and together we’ll touch and transform lives.

Walking the path of self is a condition but being on the path of selflessness brings one about to the pathless way. Come on the way of knowing the way and in the process bring about a change within to get liberated. View more posts